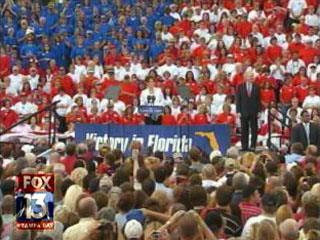 Obama has said he would cut taxes for everyone making less than $250,000 a year. A handful of independent reviews have concluded his proposals offer more tax relief than those of Republican presidential candidate John McCain.

Palin, appearing at a waterfront park, also resurrected Obama’s ties to William Ayers, a university professor who during the Vietnam era was a founder of a radical group that planned bombings of the U.S. Pentagon and Capitol. Obama, who was a child while Ayers was with the Weather Underground, has acknowledged that Ayers is an acquaintance and denounced his activities.

Referring to Obama, Palin said, “I am just so fearful that this is not a man who sees America as you and I do — as the greatest source for good in the world.”

ABC is concerned that Palin played the “fear card” on Obama.
Look for the Left to call her a racist in 3-2-1…

The Far Left is also very upset that Palin and Democrat Joe Lieberman, who introduced her, said “God” several times from the stage today.
That appears to be more offensive than her attacks on Obama linking him to a terrorist.
Figures.