More success in Iraq…
Babil Province was turned over to Iraqi authorities today.
It was another major step for Iraq made possible only by the success of the Bush Surge. 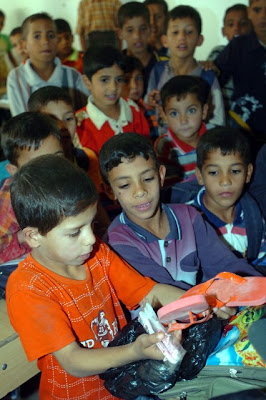 Children at the Sanadid School in Shakeriyah go through gift bags handed out by the Iraqi Army, Oct. 19, 2008. (Photo by Pfc. Christopher McKenna- MNF-Iraq)

Babil became the 12th province turned over the Iraqi Government today.
The province included the Sunni “triangle of death” that was once a dangerous area but has seen a turnaround since the Bush Surge of 2007.
The AFP reported:

Iraqi forces on Thursday took control of the central Shiite province of Babil, the 12th of Iraq’s 18 provinces to be handed over by American troops to Baghdad.

Several senior US and Iraqi officials were present at the ceremony in the provincial capital Hilla, including Lieutenant General Lloyd Austin, the number two commander of US forces in Iraq, and Mowaffaq al-Rubaie, Iraq’s national security advisor. 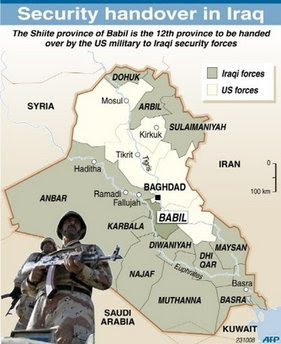 Map of Iraq showing provinces transferred from US to Iraqi control. Iraq took control of the central Shiite province of Babil from US forces, in what local officials said was further sign of security gains across the war-torn nation.
(AFP/Graphic/null)