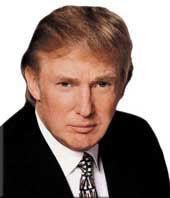 The Donald says now is not the right time to raise taxes.
The Politico reported, via Instapundit:

Trump, never shy with his opinions, went on to say that McCain appears to be winning, and that Sen. Barack Obama (D-Ill.) should have chosen Sen. Hillary Rodham Clinton (D-N.Y.) as his running mate.

“I know John McCain, and John McCain’s a great guy, a tremendous guy,” Trump told King. “I’ve known him for a long time. And I’m with him, and I’m with him based on the fact that I have great knowledge of John McCain. Also, this is not the right time for tax increases. And Obama wants to increase your taxes drastically.”

Well, maybe not your taxes. But certainly The Donald’s: Obama would repeal President Bush tax cuts for households making more than $250,000.