Her husband Don’s comments about Hurricane Gustav were bad enough…
But, today’s attack on Palin by Carol Fowler was disgusting! 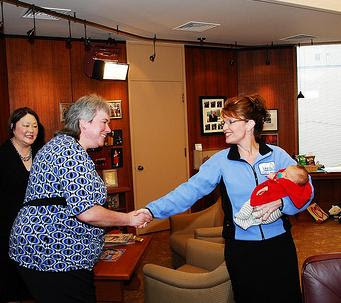 Popular Governor Sarah Palin meets supporters in Alaska after the birth of her son Trig. The governor kept her “miracle” baby even though she knew he had Down syndrome. (Flickr)

More Dem Party meltdown…
The South Carolina Democratic chairwoman lashed out at Sarah Palin saying her main qualification was that she didn’t have an abortion.
Unbelievable!
The Politico reported:

Palin is an opponent of abortion rights and gave birth to her fifth child, Trig, earlier this year after finding out during her pregnancy that the baby had Down syndrome.

Fowler told my colleague Alex Burns in an interview that the selection of an opponent of abortion rights would not boost McCain among many women.

“Among Democratic women and even among independent women, I don’t think it helped him,” she said.

This is particularly disgusting considering the Alaska governor just made a very difficult decision to keep her new baby even though she knew he was Down syndrome.
It’s also an attack on her newborn baby.
That’s really, really sick.

UPDATE: Carol released an apology to those who may have been offended, via HotAir:

I personally admire and respect the difficult choices that women make everyday, and I apologize to anyone who finds my comment offensive. I clumsily was making a point about people in South Carolina who may vote based on a single issue. Whether it’s the environment, the economy, the war or a woman’s right to choose, there are people who will cast their vote based on a single issue. That was the only point I was attempting to make.

It was a “clumsily” made statement.