Global Labor reported today that a close Obama associate was tipped off about the requests of information regarding the Chicago Annenberg Challenge (CAC) before the records were released.
Obama worked with terrorist Bill Ayers for several years leading the organization. 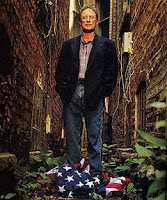 Obama CAC colleague and friend Bill Ayers is seen here on the US flag.

There is much more to the story at Global Labor.