Protesters at the anti-Ahmadinejad UN rally today were furious that Sarah Palin was disinvited by the rally organizers. 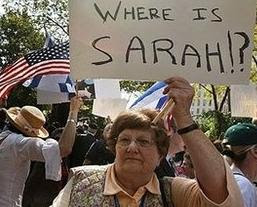 A woman holds a “Where is Sarah?” sign at an anti-Iran rally outside United Nations headquarters during the 63rd General Assembly in NYC. (AFP)

Politics and diplomacy were not a good mix at Monday’s protest rally against Iran at the United Nations.

Hillary Clinton and Sarah Palin didn’t participate in the “Stop Iran Now” rally and there were a lot of hard feelings about it.

It was a simple sign that read “We Want Sarah. Shame On The Rally Organizer.”

Howard Webber from Brooklyn held it.

“As important an event as this is, you needed a unity of Democrats and Republicans to show Ahmadinejad that we’re not going to accept a nuclear Iran.”

“I’m so disappointed, upset,” Macy said. “She would have brought 10,000-20,000 more supporters of Israel. People who were curious were stopped because of partisan action.”

The brouhaha started after Clinton pulled out after she learned Palin was invited. Three organizations supporting the rally threatened to pull out unless Palin was disinvited. She was but organizers didn’t stop there.

They were furious Monday about the political signs brought by some at the rally, like an anti-Obama sign that said, “Jews Against Obama & Ahmadinejad.” 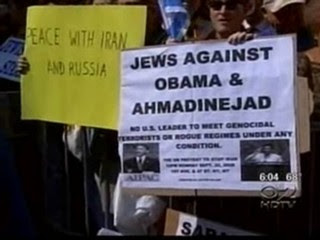 Elie Wiesel told the crowd today (Video) that, “Ahmadinejad should not be here in New York, but in Holland in a U.N. prison cell.”

UPDATE: Iranian activist Banafsheh Zand Bonazzi was at the rally and mentioned that there were several pro-Palin signs in the crowd but that there were not many anti-Obama signs.

UPDATE: PJTV has a report from the rally.

Atlas reported that turnout was down this year from previous years.
Hat Tip Larwyn