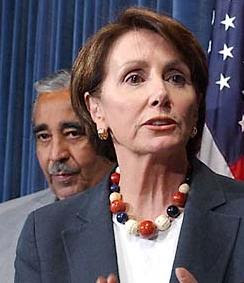 More Swamp Politics…
Speaker Pelosi will not remove Rep. Rangel from his leadership position as chairman of the House Ways and Means Committee even after the news broke on his latest scandal.
The Politico reported:

Hoping to put the Democrats’ “culture of corruption” argument to work for themselves, House Republicans on Tuesday called on House Speaker Nancy Pelosi (D-Calif.) to remove Rep. Charles B. Rangel (D-N.Y.) from his post as chairman of the House Ways and Means Committee.

Pelosi said she has no intention of forcing Rangel to step aside, and the chairman made it clear that he’s not going anywhere on his own.

“Charlie Rangel is a very distinguished member of the House of Representatives,” Pelosi said in a brief interview Monday. “Whatever the leaders on their side say, he is very well-respected by members on both sides of the aisle.”

Rangel offered no direct comment on the GOP attempt to topple him but said he would “rely on the thinking of Speaker Pelosi.”

Rangel has been battered by a series of recent stories questioning his use of rent-stabilized apartments in Harlem as well as his efforts to raise money for the Charles B. Rangel Center for Public Service at the City College of New York. And last week, the New York Post reported that Rangel had failed to declare $75,000 in rental income from a vacation home he owns in the Dominican Republic.

So much for that “most ethical congress ever,” huh?