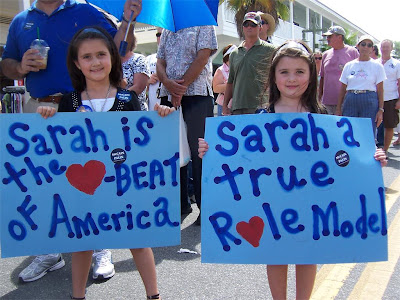 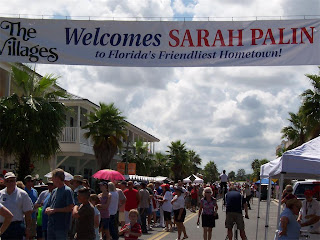 Thousands of Floridians lined up to see Sarah Palin today in Florida. 60,000 people showed up to see Governor Palin in a community of about 75,000. (WPTV)

More than four hours before Palin arrived, cars and golf carts jammed nearby roads and thousands of people clogged the Disneyesque Sumter Landing town center area to wait in the baking heat for a glimpse of Palin.

Palin T-shirts, buttons and hats – most of them making reference to lipstick, pit bulls, hockey or some combination of those elements – were everywhere. There were also people wearing McCain items, but usually with Palin’s name on them somewhere.

Deborah Abriola came from Orlando and wore a button that said “Don’t Let The Lipstick Fool You – Pitbulls for McCain-Palin” because she said she feels kinship with Palin as a fellow “lipstick mom.”

…Abriola described herself as a conservative Democrat who sees Palin as a role model for mothers.

Her friend, Cheryl LeDuc, said she’s a Republican but wants to see a shakeup in the GOP. She said Palin “is conservative and she’s going to clean up Washington, including the Republicans.”

Unlike their competition, it doesn’t look like the McCain-Palin camp had to offer beer or Marxist rock bands to lure the supporters.

More… A plane flew overhead with a banner declaring, “The South is Palin Country.”

Pereiraville and Bakerstreet have photos from the rally.

UPDATE: Local 6 has video of Governor Palin’s speech today including this, “Raising taxes is not about patriotism. It’s about Barack Obama’s poor judgement… Barack Obama told his supporters to go out and ‘get in their faces.’ That isn’t hope.”