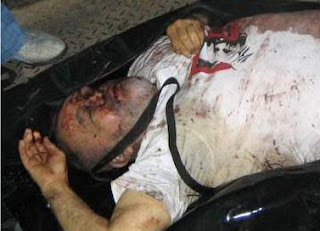 Before his death a leader of the RNC Welcoming Committee travelled to Colombia to meet with the Marxist leader Reyes who was responsible for kidnapping Americans and trafficking drugs to pay for terror. The RNC activists also planned to kidnap Republican delegates in St. Paul.

Ray Robison at The Examiner reported on the links between the RNC Welcoming Committee activists and the Marxist FARC terrorists in the Colombian jungles.
Here is part of that report:

Ms. Sundin told the Pioneer Press outlet TwinCities.com that she had discussions with the anarchists “but only to make sure they don’t disrupt the march.” Sundin claimed “They’ve made a commitment not to interfere”.

A website called fightbacknews.org describes another meeting held at the University of Minnesota last February. It claims that a gathering of sixty anti-war organizations including the RNC Welcoming Committee met to plan for the protest. Speaking at that meeting was Jessica Sundin. Also headlining the event was Phyllis Walker “president of AFSCME Local 3800, the campus clerical workers union”. That website describes the meeting as such:

“In the weeks leading up to the organizing conference extensive discussions took place among the forces that are planning actions at the Republican National Convention, including the anarchist-oriented RNC Welcoming Committee …”

Videos of the speeches are on Google. These websites indicate that Walker, the union leader and Sundin, a union member coordinated for the RNC Welcoming Committee and that it was open knowledge at the time that it was an anarchist group. The “fight back” website also cites a speech in 2004 by union President Walker about a trade dispute with U of M in which she stated that the union should use “any means necessary”. In 2005 she was served with a summons for obstructing legal process but the charges were dismissed for her role in a campus protest.

The website UnionFacts.org lists Phyllis Walker as a member of the Executive Board of the State, County, and Municipal Employees AFL-CIO Council 5 from which she drew over $11,500 in salary from the Union in 2005-2006, the latest time-frame available at the website. The Council 5 website doesn’t currently list Walker as an executive board member although it does list her as the local 3800 president.

Jessica Sundin was a coordinator of the protests. In media reports she tried to distance the law abiding protest groups and herself from the anarchist group. However, a thorough review of the online record shows that the RNC Welcoming Committee was integral to the planning led by Sundin and Walker.

In one article on the “fight back” website Sundin describes a trip to Columbia to meet with the now deceased infamous FARC commander Raul Reyes as a representative of the “US solidarity activists”. Reyes was a Communist guerrilla fighter known for cocaine trafficking and kidnapping Americans. Saint Paul Police have alleged a kidnapping plot by the anarchists aimed at the RNC.

Sundin described the FARC leader who was convicted of the murders of over a dozen Columbian police officers as such “I enjoyed his warmth and humor. He had a friendly, round face, a quick smile, and surprisingly gentle hands.” Of his death she wrote “The criminal Colombian government and their U.S. accomplices should be called to pay for this cowardly and criminal attack.” The Republican Party strongly supports the government of Columbia in its’ fight against the FARC. Some experts consider anarchist groups to be based on communist ideals and fronts for communist activities.

Thanks to Monica Showalter for the story

FARC terrorists had been holding US defense contractors Keith Stansell, Mark Gonsalves and Thomas Howes since 2003 in the jungles of Colombia until they escaped this summer. 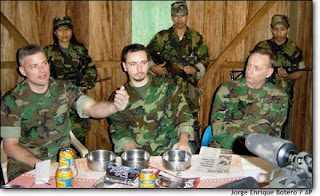 Gonsalves, Stansell and Howes were doing drug surveillance for the Department of Defense when they were taken hostage in February 2003. The single-engine plane carrying them and two other men crashed in a remote, mountainous region south of Colombia’s capital, Bogota. Almost four years later they were still being held by FARC… until their escape in July.