Nancy Pelosi announced that the bailout bill is posted at the US House website and at http://financialservices.house.gov.
(Due to traffic- the websites are impossible to get on right now. Porkbusters has a copy.)

St. Barney Frank of the Corrupt Rose to the rescue… 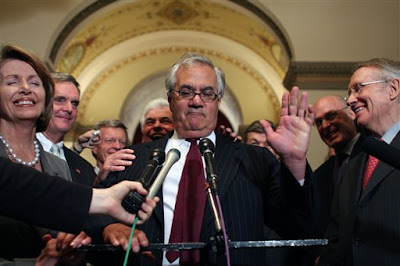 The GOP was able to remove the gifts to ACORN from the bill.
It will be interesting to see what else the dems snuck into the package.

UPDATE: The House GOP members just gave their press conference on the bailout plan. Minority Leader John Boehner gave John McCain credit for inserting himself into the process and giving the GOP House members a voice on the bailout bill.

John Boehner: “And, I think I’ve been clear to many of you that without John McCain supporting me at the White House when I said, “Woah, woah, time out,” they would have run over me like a freight train and I’m grateful for his support.”

UPDATE 2: The GOP House members have released a “Myth vs. Fact” sheet on the bailout plan.

UPDATE 3: Barney Frank’s fingerprints are all over this scandal.
No wonder the Dems put him in charge of the bailout.