Move over Barbie– There’s a new doll in town and she’s packing heat! 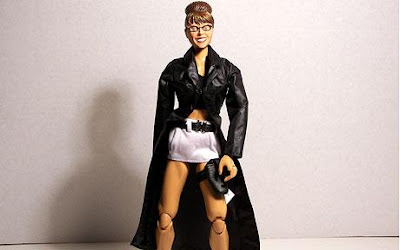 Here’s something for your little darling… A gun-toting Sarah Palin action figure.
The Telegraph and LGF Quick Links reported:

Two new action dolls have gone on sale of Sarah Palin, the Alaska Governor who John McCain has chosen to be his Republican presidential running mate.

The dolls are the latest in a line of American political candidates who have been immortalised including John McCain and Barack Obama and Hillary Clinton.

Two variations of the doll are on sale – Sarah Palin the Executive and Sarah Palin the Super Hero – available from toy company http://www.herobuilders.com at $27.95 (about £16) for the executive doll and two dollars more for the super hero version.

It is designed to capitalise on Sarah Palin mania that has gripped Republicans after the electrifying speech by the self-confessed “hockey mom” at the party convention in St Paul, Minnesota.