Look out! It’s the goon squad! 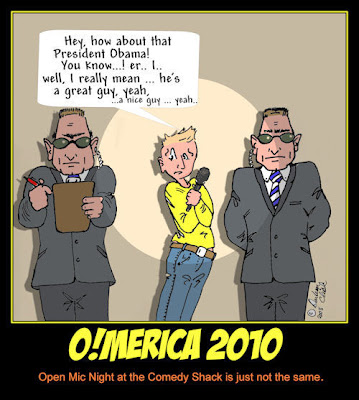 Cartoon by Darlene Click from Protein Wisdom and Darleen’s Place.

The Missouri media has been silent about the “Obama truth squad” story that ended up on the Drudge Report and was splashed across the internet and talk radio last week.

Finally this weekend there was one article written at Springfield News Leader by Chad Livengood that defended the Democratic top prosecutors who are threatening those who spoke out against Barack Obama.
Livingwood insists that the video report “got twisted.”

Then their is known Leftist Jo Mannies from the St. Louis Post Dispatch who smears the McCain Camp in defending the Obama Truth members who threatened to sue opponents of Barack Obama:

With the Missouri polls showing a dead heat between Republican John McCain and Democrat Barack Obama, every campaign move is igniting scrutiny.

That’s the backdrop over a two-day dust-up that is attracting local TV coverage, and has even ignited a Web fight between the Drudge Report and the Daily Kos.

At issue is a new Obama “Truth Squad” formed in the state.

(As an aside, please note that both sides have “Truth Squads” in numerous states, under numerous titles. McCain’s campaign has an Honest and Open Election Committee, whose Missouri members include former Sen. John Danforth and U.S. Rep. Jo Ann Emerson, and another state McCain group monitoring any Democratic jabs at Alaska Gov. Sarah Palin.)

The inclusion of such officials has led to Gov. Matt Blunt, among other Republicans, to accuse the Obama camp of planning “to use Missouri law enforcement to threaten and intimidate his critics.”

First of all… for Mannies to compare the Drudge Report to DKos is nuts. Drudge currently has 20,000,000 viewers each day to a Daily Kos readership of a few hundred thousand. Also, the Drudge Report posts headlines and does not “fight” with blogs (and rarely links to them).
And, Drudge does not spread toxic anti-Semitic, anti-American filth, either.
The fact that Mannies compared the two says more about Mannies than anything.

Missouri GOP leader Ed Martin passed this on about the goon squad defenders:

The reporter is trying to backtrack but he is, I suspect, covering for the Obama-supporting prosecutors. And, more importantly, KMOV continues to keep the segment on its webstie.

The Intro to the TV piece is this:

“The Barack Obama campaign is asking Missouri law enforcement to target anyone who lies or runs a misleading TV ad during the presidential campaign.”

That is pretty clear: it is not saying “elected law enforcement plan to be involved in the political campaign.”

“Target” is an official word that is used for criminals – as in “target the criminals.”

“They also say that they plan to respond immediately to any ads and statements that might violate violate Missouri ethics laws.”

That is: prosecutors are saying that they are going to use their official capacity as law enforcement to fight back.

Did the reporter make it up? If yes, then the prosecutors should demand that he take it down!

Good questions.
Why is it not surprising that after days of silence the Missouri media is finally defending the Goon Squad members?