Oh– That’s just downright mean!
Have you no pride? 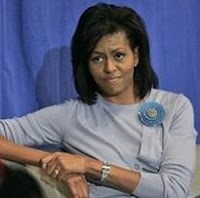 Sarah Palin’s in her head, too.

Michelle Obama took a poke at Sarah Palin today at a round-table with a few cynics, sloths and complacents.
Breitbart reported:

Michelle Obama asked voters Thursday to make their choice on the issues, not because, “I like that guy” or, “she’s cute.”

Might she be talking about Republican vice presidential candidate Sarah Palin?

“I’m talking about me,” she said with a smile.

Barack Obama’s wife, however, is not on the ticket in the presidential election. Palin is.

Her remarks came at a women’s round-table on the economy as Democrats work to neutralize the appeal that Palin has brought to John McCain’s ticket for some female voters. They are doing so gingerly, so as to not appear sexist or invite another lipstick-on-a-pig tempest.

Michelle Obama told the audience her husband is only candidate focused on equal pay, health care, affordable college, teacher recruitment and other issues of concern to women. She said that’s what the election should be about.

“People shouldn’t make a decision this time based on, ‘I like that guy’ or ‘she’s cute,’” she said.

The line won a big round of applause. Before it subsided, she interjected: “And I’m talking about me.”