When you run a whole campaign based on image and you lack experience, sound judgement and solid principles, this sometimes happens.

The Obama-Biden Campaign continues to drop.

Even the Far Left The Huffington Post is starting to see the writing on the wall:
“We’re Gonna Frickin’ Lose this Thing” 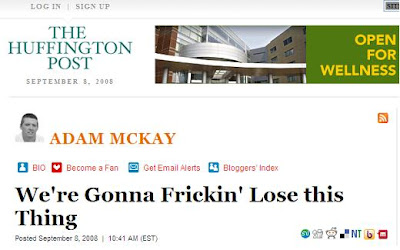 Sadly, the author blames the press for their losing candidate.
Huh?
There’s never been such a weak candidate given such glowing reviews. There’s never been a candidate who was excused as many times as Obama with G-D Wright, Fr. Pfleger, Bill Ayers, Rezko, his liberal record, inexperience,…
Sorry guys, it’s not the press–
It’s the candidate.

UPDATE 3: The Strata-Sphere has more on Obama’s crash and burn.