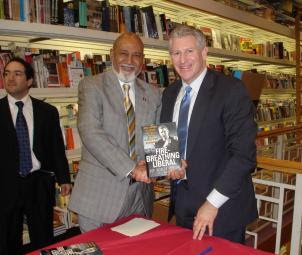 Rep. Alcee Hastings told an audience of Jewish Democrats Wednesday that they should be wary of Republican VP nominee Sarah Palin because “anybody toting guns and stripping moose don’t care too much about what they do with Jews and blacks.”

“If Sarah Palin isn’t enough of a reason for you to get over whatever your problem is with Barack Obama, then you damn well had better pay attention,” Rep. Alcee Hastings of Florida said at a panel about the shared agenda of Jewish and African-American Democrats Wednesday.

Hastings, who is African-American, was explaining what he intended to tell his Jewish constituents about the presidential race. “Anybody toting guns and stripping moose don’t care too much about what they do with Jews and blacks. So, you just think this through,” Hastings added as the room erupted in laughter and applause.

Let’s face it.
There is no way a Republican could say anything this foul and still have a career.
Then again… There aren’t any impeached Republican judges currently serving in the US House.

The New Editor has more on this disgusting attack on Sarah Palin by a Democratic leader.