Marxist President Evo Morales, a Chavez lackey and supporter of the Iranian regime, blamed opposition activists for killing government supporters this weekend.
–Opposition leaders said the Marxist fighters were armed and intent on starting violence in the region.

Here is AMAZING Footage of fighting at the airport in the city of Cobija, Bolivia this weekend:

Thanks to Jose Brechner for sending the video. 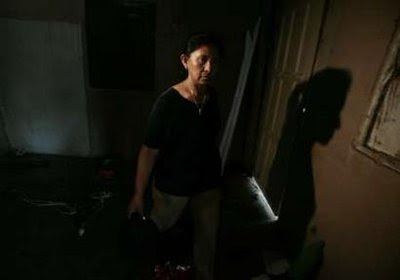 Maria Lourdes Alvarez, wife of opposition leader Jorge Villagomez Vaca, recovers personal items after her home was attacked and burned by Morales’ supporters in the Plan 3000 neighborhood of Santa Cruz early morning September 14, 2008. Bolivian troops patrolled the city of Cobija in the extreme north before dawn on Sunday, as the death toll rose to around 30 from days of clashes between government and opposition supporters. (REUTERS/David Mercado)

It is difficult to determine what exactly is taking place in Bolivia today as Morales backers in the Western media want to blame the pro-American capitalist opposition for the violence. Several people were killed this weekend in fighting. Morales has kicked out independent journalists which makes it difficult to get a clear picture of the situation.

The socialist government of president Evo Morales centralized all the financial resources of the state and doesn´t want to give back the taxes from oil revenues to the producing provinces. The oil producing provinces are led by opposition leaders who want more autonomy from the Marxist Morales regime. Evo also wants to approve a new political constitution that gives privileges to the Indians, above the rest of the population.

Since Morales took over, he is governing de facto. He bent the laws to his convenience, he imposed measures by force, his government forged identification documents for Cuban, Venezuelan and Iranian agents, kidnapped opposition members, promoted coca and cocaine production, threatened journalists, killed adversaries, gave Hugo Chavez sovereignty over Bolivia, he is allied with Islamic terrorism, bribed military officers to gain their loyalty, imported thousands of Cuban and Venezuelan communists, committed terrorist attempts, but he talks of democracy.

He is destroying 26 years of freedom and democracy in Bolivia. People got fed up with his communist ideology and behavior, and the situation will increase in violence. Sixteen people were killed yesterday, but it seems there are more bodies to be found yet.

Morales sent troops to the Pando region bordering Brazil and Peru, where the fighting took place and he expelled all independent journalists, therefore nobody can report accurately about what is going on.

For less than that, we suffered dozens of military coups in the past.

Here’s more from Jose Brechner on the hand of Hugo:

Hugo Chavez also expelled the US ambassador in Venezuela, and ordered the return of his ambassador in Washington D.C. “before he is kicked out” he added.

“Enough sh*t from you f*cking Yankees!” he said in a public political speech in the state of Carabobo. “Latin America will be respected the day we will sing as a single rooster, that´s the secret”.

He is in very close ties with Putin. He offered Russia all his airports and harbors to do whatever they wish militarily.