Author David James was disgusted with what he discovered when he met Barack Obama’s younger brother George in his foul-smelling slum hut in Huruma estate. 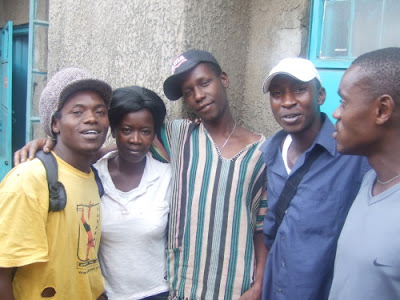 Left to Right : Rastaman, One of the girls in George’s room, George Hussein Obama, Jack, a body guard in the Kenyan slum. (Thaindian)

David M N James made the trip to the Nigerian slum to meet with Barack Obama’s younger brother in his foul slum hut.
Thaindian News reported:

I have heard that brotherhood is every man’s life and that blood is thicker than any known liquid. However, yesterday I trashed those suppositions when I met George Hussein Obama, the long lost brother of Senator Barack Obama who is eyeing the US presidency.

Senator Obama a wealthy American with roots in Kenya and even relatives here in Kenya should in-act be ashamed of ever attempting to become US president. It is disgraceful for what I encountered from the meeting with George Obama is way off from brotherhood and blood.

George Obama, a 26 year old man lives in Huruma estate in a dingy he calls a house. In fact its not a dingy but a single room with a foul stench of stale cigarette and fresh pot smoke. I was short of words; I was shocked and repulsive at the environment a brother to a man who might one day become the most powerful man in the world lives. Huruma is sprawling slum laden estate. Flies, dirty as they are, fly allover, women and children everywhere, dirty and unkempt wander here. Small enterprises and all sorts of bars, video watching rooms and dirty food joints are strewn along the streets.

I set off at around 2pm local time, I know no one here, except my friend Jack who was my right hand man. We were armed since the place is famous with crime. Here you find qualified muggers, gun-slinging criminals and teenagers, so if you are a simpleton, you won’t get out of this place in one piece.

Jack and I were at pains, we knew no one, so Jack devised a plan B, we were to pose as researchers doing research on micro-enterprises. It worked; first we talked to one carpenter, Oloo. The reason for approaching Oloo was that, we need someone who is from the Obama community. They are known as Luo’s. Oloo was cooperative. However, he gave us the wrong directions and we found ourselves hitting the road in slums and desolate households.

…Bryan was reserved and a it distant though he told us a little. “Yes, I have heard of him. But I here he moved out after the media guys began tracking him almost every hour. He left this place for a more decent place. The media people said he was living in a slum and it was bad for his brother’s candidacy, so he moved out…”

“Do you have an idea where he used to live?” I asked jokingly

“Hmmm..!!i here he was living at Buffalo, he has friends there I guess…” Bryan said dismissively.

“Well Bryan, thanks for your time, we hope we can find Mr. Obama, so he can tell us if he too is a business man“, I summed up the interview and told Jack we get lost.

We talked to cobblers, carpenters and chemists; no one gave us the right direction until we found an old man who sells water here. We talked about our project very convincingly until he believed it. He showed some fellas seated in a group. “One of them is the owner of the barber shop you see there, he knows a lot, since he knows so many criminals and people here, am sure he could be of help“.

Its Jack who approached the gang, they were cooperative and we tipped them handsomely. The guy gave Jack a detailed description of George Obama, “he lives in Huruma near St Francis Hospital!”

Again we hit the road, there was no where to refuel here, but we had covered miles walking to and fro and deep inside the slum. I checked the time and found out it was hitting 5.30pm, the wee hours of the evening and the most dangerous for strangers here. We parked the car in a petrol station and began our walk again.

We found the hospital, a humble establishment for saving lives. We asked around, one man, a pistol tucked on his jeans showed us where we could locate Obama. We tried, but no one was home. We saw a little girl; she too showed us the same neighborhood. Along this neighborhood, they are selling fish, on the side of streets. The fish stinks, and hordes of flies are flying over the fish…just disgusting, horrid and completely repulsive!!!

I saw all sorts of foods being sold the same way, flies and just in such a horrid state. I didn’t want believe a big name like Obama can be here. We met one Rastafarian, we tipped him and he told us Obama is one of his clients. He peddles bhang/pot, he led us to George Obama’s den.

Obama, is a tall, slim and kind of reserved young man. He asked us what we wanted. It told him curtly. He said he can’t speak without being paid. I looked at Jack and he was perspiring.

“Wait!!” The Rasta man shot back “I will negotiate”

The Rasta man went with Obama and they negotiated and came back 15 minutes later. We were offered $200 for 5 minutes, period!!

I agreed and paid half and promised to pay the rest after the interview. He led us to the dingy, pot smoke filled room.

Obama said he supports his brothers presidency. He confessed that he barely communicates with him but hopes to meet him soon. Also that, he doest get any kind of support from the multimillionaire Barrack Obama.

George was emphatic that he is used to Huruma life which he called ghetto life. He is into drugs and all sorts of vices, one of his bodyguards, (the two men we found in the room) said he has tried all drugs you can mention. He eats whats found there and that he has been earning from the tons of journalists coming to see him. He boasted at a time when he said that he turned away a CNN crew which was offering him $1500 which is equivalent to kshs 100, 000.

It was incredible and we did our five minutes as we got intoxicated with the foul smoke of pot and cigarette. The George Obama associates were enjoying it and also drank some cheap gin and coke.

We left in rush, choking but shocked, is it really a brother to a man contending for the American presidency?

Amazing!
Barack Obama has talked several times about being his brother’s keeper.
Obviously, he wasn’t talking about his little brother George.

By the way… Once again it was a foreign media outlet that ran the story.