With the country in crisis– It’s politics as usual. 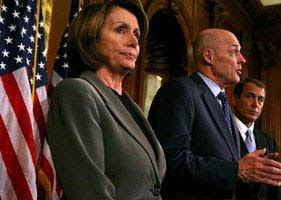 Speaker Nancy Pelosi, Secretary Paulson, and House Minority Leader John Boehner at a meeting in Washington. Yesterday, Paulson got down on one knee to beg Pelosi and the Democrats not to blow up the bailout legislation. (Katie Falkenberg/The Washington Times)

President George W. Bush gave this statement this morning on the ongoing talks on a rescue plan:

THE PRESIDENT: Good morning. My administration continues to work with the Congress on a rescue plan. And we need a rescue plan. This is — it’s hard work. Our proposal is a big proposal. And the reason it’s big and substantial is because we got a big problem.

There are disagreements over aspects of the rescue plan, but there is no disagreement that something substantial must be done. The legislative process is sometimes not very pretty, but we are going to get a package passed. We will rise to the occasion. Republicans and Democrats will come together and pass a substantial rescue plan.

Thank you very much.

The president did not take any questions.

Meanwhile… Details were released on the meeting yesterday at the Capital.
The Politico reported on political breakdown:

Both McCain and his Democratic rival, Sen. Barack Obama, would leave the White House without comment, and the meeting was described as among the wildest in memory. A beleaguered President Bush had to struggle to maintain order and reassert himself. And when Democrats left to caucus in the Roosevelt Room, Paulson pursued them, begging that they not “blow up” the legislation.

The former Goldman Sachs CEO even went down on one knee as if genuflecting, to which Speaker Nancy Pelosi (D-Cal.) is said to have joked, “I didn’t know you were Catholic.”

It was McCain who had urged Bush to call the White House meeting but Democrats made sure Obama had a prominent part. And much as they complained later of being blindsided, the whole event turned out to be something of an ambush on their part—aimed at McCain and House Republicans.

It figures.
With the country about to slide into economic freefall caused by democratic policies, the Dems plot a political ambush.

Oh, and should Nancy Pelosi really be cracking Catholic jokes?

It was also reported this morning that the Democratic proposal would a large chunk of cash to left-wing political advocacy groups like ACORN, the National Urban League and the Hispanic group La Raza.