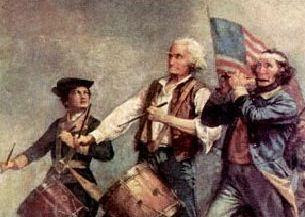 Isn’t that part of the reason we broke from England?
After struggling for several years with supporting the troops in Iraq, Democratic VP candidate unveiled a new definition for “patriotism” today. It’s something his colleagues can hopefully rally around.

The AP and Drudge reported:

Democratic vice presidential candidate Joe Biden said Thursday that paying more in taxes is the patriotic thing to do for wealthier Americans.

The Republican campaign for president calls the tax increases their Democratic opponents propose “painful” instead of patriotic.

Under the economic plan proposed by Democratic presidential candidate Barack Obama, people earning more than $250,000 a year would pay more in taxes while those earning less — the vast majority of American taxpayers — would receive a tax cut.

“We want to take money and put it back in the pocket of middle-class people,” Biden said in an interview on ABC’s “Good Morning America.”

Noting that wealthier Americans would indeed pay more, Biden said: “It’s time to be patriotic… time to jump in, time to be part of the deal, time to help get America out of the rut.”

Of course, Obama voted four times for increased taxes on those Americans making more than $50,000. Is that wealthy?
Can we call them socialists, yet?