Iranian President Mahmoud Ahmadinejad will be a guest on “Larry King Live” tonight on CNN. 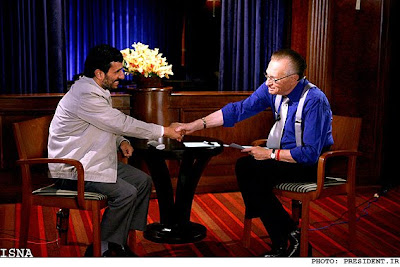 The Iranian regime president says he is willing to meet with Obama or McCain in front of the media to debate and discuss the world issues.
CNN reported:

Iranian President Mahmoud Ahmadinejad is willing to meet with presidential candidates Sens. John McCain and Barack Obama — even in front of the media — to discuss world issues and debate.

But in an interview on CNN’s “Larry King Live” to air Tuesday night, he says he has no preference between the two.

“We believe that these are issues relating to the domestic affairs of the United States,” Ahmadinejad said of the presidential race, according to a transcript of his remarks.

“This is the campaign period, anyone can say anything. So we disregard that. What matters is that once someone is in office, we have to watch and see if that person will bring about some changes in policy or continue the same old path. I think that’s more important than who is actually voted into office.”

Of course, Barack Obama has said he would meet with the world’s dictators and brutish thugs without preconditions. 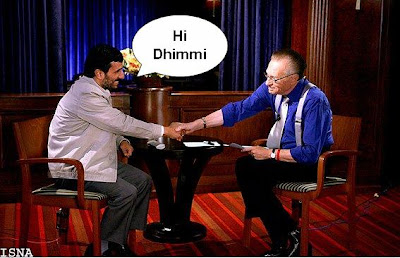 Ahmadinejad also told the UN today that some bullying powers were trying to “trying to thwart Iran’s peaceful nuclear ambitions but Tehran would resist and defend its right to nuclear power.”