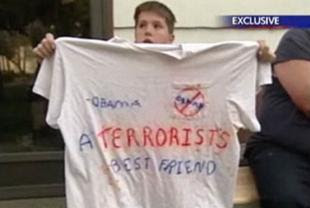 Daxx Dalton shows off the anti-Obama shirt that got him suspended from school in Colorado. (Nine News)

A child in Colorado was suspended for wearing an anti-Obama shirt on Red, White and Blue day.
Nine News reported:

An 11-year-old boy has been suspended from school for wearing an anti-Barack Obama shirt declaring the Democrat presidential nominee as a “terrorist’s best friend”.

Daxx Dalton, a Year Five student at Aurora Elementary School in Colorado, wore the shirt to school on a day where students were asked to wear something red, white and blue to show their patriotism for the United States, Fox 31 News reports.

The school gave Dalton an ultimatum — turn the shirt inside out or he would be suspended.

Slapstick has more on the story.