Barack Obama killed legislation that would have saved the lives of babies born after botched abortions.
That’s disgusting… No wonder he tried so hard to hide this. 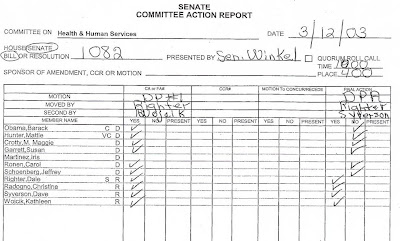 In 2003, Barack Obama, as chairman of an IL state Senate committee, voted down a bill to protect live-born survivors of abortion. The right hand column shows the roll call by which Obama and his Democratic colleagues killed the amended bill – the bill was virtually identical to the federal law that Obama, starting in 2004, claimed he would have supported if he’d had the opportunity. (Jill Stanek and NLRC)

Barack Obama had the nerve to call the Right to Life Coalition liars on Saturday night over his move to kill born-alive legislation in the Illinois Senate.
(1 minute 50 seconds)

Yet after the Saddleback Showdown on August 16, 2008, Obama stood by his lie when asked about it by CBN’s David Brody, as shown on CNN.

Yet, after realizing that the Right to Life Coalition had documents to back up their allegations against Obama’s radical abortion record–
His camp changed their story on Sunday.
The New York Sun reported:

Indeed, Mr. Obama appeared to misstate his position in the CBN interview on Saturday when he said the federal version he supported “was not the bill that was presented at the state level.”

His campaign yesterday acknowledged that he had voted against an identical bill in the state Senate, and a spokesman, Hari Sevugan, said the senator and other lawmakers had concerns that even as worded, the legislation could have undermined existing Illinois abortion law. Those concerns did not exist for the federal bill, because there is no federal abortion law.

Amazing!
Rather than continuing to slander the Right to Life Coalition Obama admitted that his stand on abortion is the most liberal of any Washington Politician!

David Freddoso added this and more on Obama’s deceit at National Review this morning:

Sen. Obama is currently misleading people about what he voted against, specifically claiming that the bill he voted against in his committee lacked “neutrality” language on Roe v. Wade. The bill did contain this language. He even participated in the unanimous vote to put it in.

*** Obama has not apologized to the Right To Life Coalition, yet.