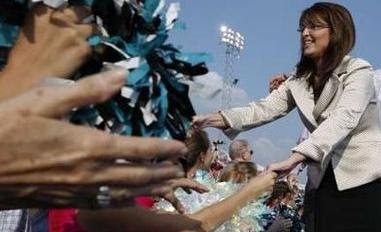 (Reuters Photo)
20,000 in Missouri rally with McCain and Palin! 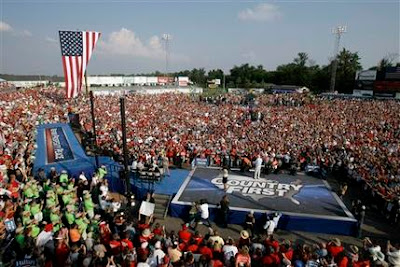 KMOV reported on the Missouri rally:

McCain spotlighted Palin at the suburban St. Louis rally — giving her the clean-up speaking spot on a stage erected over the ballfield’s home plate. She got an enthusiastic reception from the crowd that filled the infield bleachers and spread from the dirt base paths into the outfield grass. At various times, they chanted, “Sarah, Sarah.”

The ball team’s president said the stadium holds about 15,000 for such concert-style events. Republican consultant John Hancock, who served as master of ceremonies for the event, estimated there were about 20,000 people.

KSDK in St. Louis has video of McCain’s speech today in O’Fallon.

Bob McCarty has an excellent roundup from the rally today.