August 14th is the Feast of St. Maximilian Kolbe. 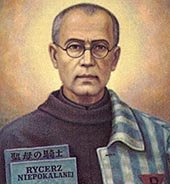 Da Mihi Animas wrote today about this heroic man, including this amazing segment on his martyrdom:

In 1941, the Nazis arrested Father Kolbe. They sentenced him to hard manual labor at Auschwitz. He was at Auschwitz three months when a prisoner successfully escaped. The Nazis made the rest of the prisoners pay for the escape. They chose ten prisoners at random to die in the starvation bunker. All the prisoners stood at attention, while ten men were pulled out of line. One chosen prisoner, a married man with a family, begged and pleaded to be spared for the sake of his children. Father Kolbe, who had not been picked, listened and felt deeply moved to help that suffering prisoner. He stepped forward and asked the commander if he could take the man’s place. The commander accepted his offer.

Father Maximilian Kolbe gave his life so that another man might survive.
He didn’t blow up himself. He didn’t slaughter dozens with him.
Maximilian Kolbe was a true martyr.
He offered his love. He did not offer pain and misery.

St. Kolbe is a patron saint of the Pro-Life movement.