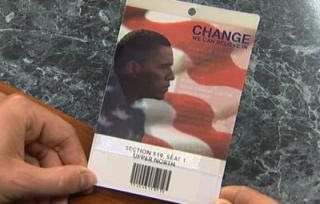 The DNC tickets printed for Barack Obama’s acceptance speech at Invesco Field show an upside down US flag on both sides.
This is the international symbol of extreme distress.
FOX 9 reported:

The viewers say with the stars and blue field in the lower left corner, it looks like an upside down American flag. Published flag etiquette states the stars should always be displayed in the upper left corner. An upside down flag represents an international symbol of extreme distress.

Matt Chandler with the Obama campaign says the flag is not upside down. He says it is a stylized flag designed to blend the stars on Senator Obama’s shirt with the flag blowing in the wind.

Natalie Wyeth with the Democratic National Convention Committee sent 9NEWS the following statement Saturday night: “The DNCC community credentials incorporate patriotic design elements. They do not depict an actual American flag. The DNCC has full and complete respect for the flag and all rules of display.”

Is this an “O”men of things to come? 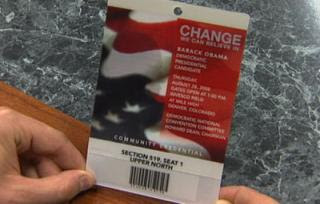 More… Obama’s big cash donors will get the select seats at Invesco Field next week.

This was cross posted at Founding Blogggers.