Russian jets targeted a key oil pipeline with over 50 missiles in a weekend bombing raid in Georgia that raised fears the conflict will tighten Moscow’s stranglehold on Europe’s energy supplies –The Telegraph. 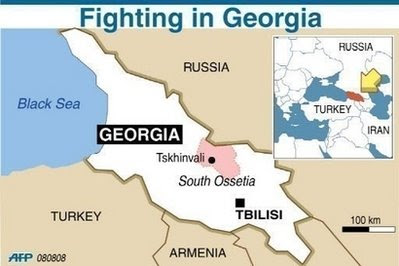 A map of Georgia showing the separatist regions of Abkhazia and South Ossetia. Russian forces took control of the Georgian breakaway region of South Ossetia as Tbilisi withdrew its troops in the face of a build-up of Moscow’s dominant firepower.
(AFP/Graphic)

Last night Russian jets reportedly bombed the Baku-Tbilisi-Ceyhan pipeline, which transports oil from the Caspian Sea to Turkey, had been attacked. But it is thought the bombs missed their target. The Russians also killed civilians and ‘completely devastated’ the strategic Black Sea port of Poti, a staging post for oil and other energy supplies.
The Daily Mail also reported:

• Russian jets widened the offensive by bombing the central Georgian town of Gori – Joseph Stalin’s birthplace – in an attack on military targets that Georgian authorities claimed killed 60 civilians, and attacked the port of Poti.
• Georgia claimed that Russian troops had opened a new front by moving into another disputed province, Abkhazia, which has also suffered from ethnic tensions.
• Georgia declared a state of war, recalled all its 2,000 troops from Iraq and ordered a mass call-up with reservists being sent to the war zone to ‘defend the motherland’.
• Russia claimed that it had ‘completely liberated’ the capital of South Ossetia Tskhinvali – a claim denied by Georgia – after flying in elite troops in an operation Moscow said was intended to force Georgia into a ceasefire.
• Georgia claimed to have shot down 12 Russian combat aircraft – but Moscow confirmed that only two planes were missing.
• Georgia may pull its 35-strong Olympic team out of the Beijing games because of the Russian military attacks, the country’s National Olympic Committee said.

The New York Times reported that Georgian soldiers were bewildered that they had been pushed out and said they were angry at the United States and EU for not coming to Georgia’s aid.

UPDATE: In the mail here is a message from concerned Latvians–
The Latvian TransAtlantic Organization (LATO) made an urgent appeal for assistance to Georgia today: 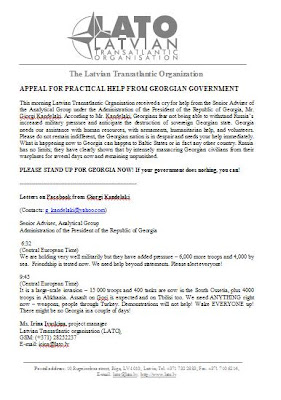 Here is that message from the LATO:

This morning Latvian Transatlantic Organisation received a cry for help from the Senior Adviser of the Analytical Group under the Administration of the President of the Republic of Georgia, Mr. Giorgi Kandelaki. According to Mr. Kandelaki, Georgians fear not being able to withstand Russia’s increased military pressure and anticipate the destruction of sovereign Georgian state. Georgia needs our assistance with human resources, with armaments, humanitarian help, and volunteers. Please do not remain indifferent, the Georgian nation is in despair and needs your help immediately. What is happening now to Georgia can happen to Baltic States or in fact any other country. Russia has no limits; they have clearly shown that by intensely massacring Georgian civilians from their warplanes for several days now and remaining unpunished.