At least 3 Georgian soldiers were killed in the Russian attack on the Tbilisi. 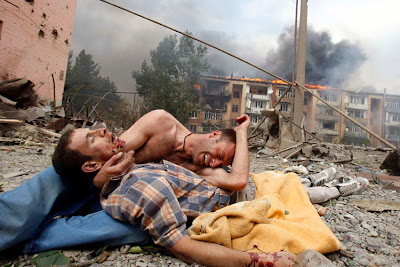 Mourning amidst the rubble: A Georgian man cries next to the body of a relative who died in Gori. (Spiegel)

Ralph Peters breaks down the war against our Western ally at The New York Post.
Georgia today withdrew its troops from Iraq to help defend the country against the Russians. 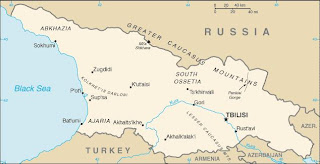 The AP posted this video on the escalating violence:

Russia Today also has their own version of the attacks.

Georgia has said that Russian aircraft bombed the an airport in the capital Tbilisi, just hours after Georgia’s parliament approved a decree saying the country is in a “state of war”.

Moscow has dismissed Tbilisi’s calls for an immediate ceasefire as the fighting continued to spread across Georgia and more Russian tanks rolled into the breakaway region of South Ossetia.

Al Jazeera’s Alan Fisher, reporting from Tbilisi, confirmed that three loud explosions had been heard from the direction of the airport.

Astute Bloggers has more on the Russian attack on the Georgian airfield.

John McCain released a strong statement against the Russian aggression today.
Barack Obama?… Not so much.

Glenn Reynolds has a roundup of coverage.