Russian accused CNN of airing footage from the destroyed Ossetian city of Tskhinvali in their report on attacks in Gori, Georgia. 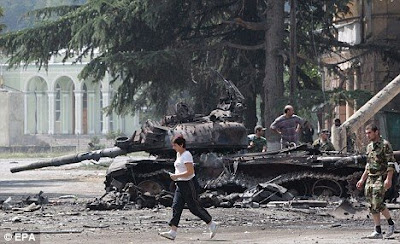 In one of its news bulletins on the Russian attacks inside Georgia CNN aired footage of destroyed tanks and ruined buildings from Ossetia.
Russia Today posted the video:
(1 minute 39 seconds)

Russia Today was outraged on what they claim is a misleading CNN report:

American broadcaster CNN has been accused of using misleading footage in their coverage of the conflict in South Ossetia. A Russian cameraman says footage of wrecked tanks and ruined buildings, which was purported to be the town of Gori, was in fact the South Ossetian capital Tskhinvali.

Gori was said to be about to fall under the control of the Russian army but the cameraman says the video was actually shot in Tskhinvali, which had been flattened by Georgian shelling.

Aleksandr Zhukov, from the Russiya Al-Yaum channel, said: “When we arrived and news came that Gori was being shelled, I saw my footage. I said: that’s not Gori! That’s Tskhinvali.”

The scenes in the CNN segment were definitely from Tskhinvali not Gori.
Was this an abuse of journalistic standards as Russia claims?
You be the judge.
(I’m not a great fan of Russian news but it looks like they have a point here.)