Unity will have to wait. 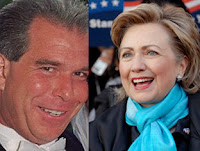 With the Democratic National Convention less than a week away, the gathering raises questions about the support Illinois Sen. Barack Obama can expect from former local supporters of Mrs. Clinton, who dominated at the polls in the Northeast in the April primary election. Mrs. Clinton won 74 percent of Lackawanna County Democrats to Mr. Obama’s 26 percent.

JWF says there’s no need to worry. The Clintons are such loyalists to the party and would never do anything to undermine Barack Obama.