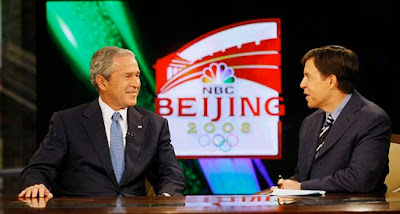 Last night during the NBC Olympic coverage President Bush gave announcer Bob Costas a history lesson on the greatness of the United States of America.
This drubbing was much better live:

BOB COSTAS: This past week you restated America’s fundamental differences with China.

BOB COSTAS: But given China’s growing strength and America’s own problems, realistically how much leverage and influence does the U.S. have here?

THE PRESIDENT: First of all, I don’t see America having problems. I see America as a nation that is a world leader, that has got great values. And leverage is — I don’t think you should look at the relationship as one of leverage. I think you ought to look at the relationship of one of constructive engagement where you can find common areas, like North Korea and Iran, but also be in a position where they respect you enough to listen to your views on religious freedom and political liberty.

Gee… Do you thing Bob Costas is a big lib?