This is comforting.
The Pelosi Save the Planet–No Drilling Plan will push oil prices to $200 per barrel in the next 5-10 years. 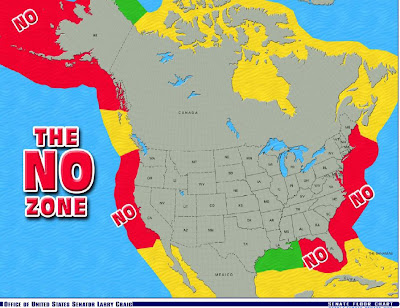 (Republican Senator Craig put together this map in 2006.)
Over the past 30 years Democrats have blocked drilling and exploration in the vast majority of our coastal waters.
Speaker Pelosi intends to continue this trend.

The BBC and HotAir reported:

A “supply crunch” will affect the world market within the next five to 10 years, the Chatham House report said.

While there is plenty of oil in the ground, companies and governments were failing to invest enough to ensure production, it added.

Only a collapse in demand can stave off the looming crisis, report author Professor Paul Stevens said.

“In reality, the only possibility of avoiding such a crunch appears to be if a major recession reduces demand – and even then such an outcome may only postpone the problem,” he said in The Coming Oil Supply Crunch.

The Obama “air in tires” plan won’t do much to bring oil to market either.