Change You Can Believe In…
The latest Reuters/Zogby Poll shows that John McCain took a 5-point lead over Barack Obama in the last month.

Obama lost ground among Democrats, women, Catholics and even younger voters this summer. 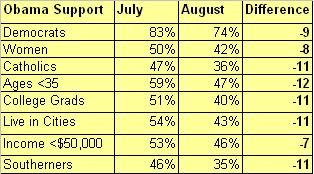 And McCain not only enjoys a five-point edge in a two-way race against Obama, but also in a four-way contest including liberal independent candidate Ralph Nader and Libertarian Bob Barr, the poll reveals. In the four-way contest, McCain wins 44% support, Obama 39%, Barr 3% and Nader 2%.

The poll shows Obama losing voters to McCain in groups where Obama had bigger leads a month ago, such as Democrats, women and younger voters. Obama also lost ground among Catholics and Southerners.

McCain’s surge follows a month in which he has aggressively portrayed Obama as an out-of-touch elitist and celebrity not prepared to be President. McCain also continues to accuse Obama of being willing to lose in Iraq in order to win the election. While Obama was on vacation last week, McCain took the spotlight, talking tough about Russia’s military action against the Republic of Georgia.

That hurts.
HotAir and JWF have more.

** In response to his sliding numbers the nation’s most liberal senator will go on the attack this month against John McCain.