This is getting really weird. 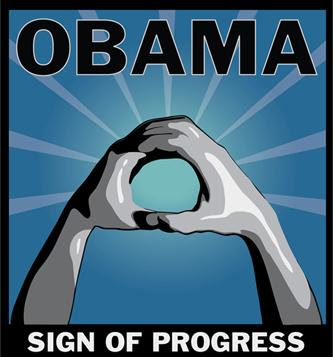 “Our goal is to see a crowd of 75,000 people at Obama’s nomination speech holding their hands above their heads, fingers laced together in support of a new direction for this country, a renewed hope, and acceptance of responsibility for our future,” says Rick Husong, owner of The Loyalty Inc. Husong tells me that he got the idea after seeing the famous Obama-Progress poster by artist Shepherd Fairey. “We wanted to get involved some way,” he says. So, the agency came up with their own a symbol of hope and progress that also plays off Obama’s name.

Yet, to others, it’s just the age-old Far Left salute to anyone who opposes the socialist state.

Then again, it could have a totally different freaky meaning.
…We won’t go there.
Hat Tip Tom W.

UPDATE: The sign was stolen from the Star Trek “Space Hippies” episode.