Take a look at this… 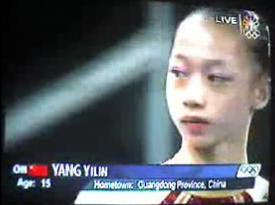 It was widely reported on Wednesday after the Chinese team won the gold medal in women’s gymnastics that several of their gymnasts were too young to qualify for the event.

In fact, it was later discovered that China was scrubbing the internet of previous articles that said the gymnasts were under the age of 16 and therefore ineligible to compete in these olympics.
It’s too bad the internet archives saved copies of these articles– They were posted here and here.
China was busted. Their athletes were too young and should not have competed in Beijing. So far the IOC has refused to act on this scandal.

Now check this out…
In the competition on Thursday night for best all around female gymnast NBC noted that Yang Lilin is 15. 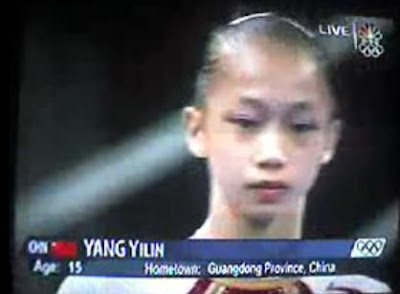 “Lonestar Pundit” has the video.

Now, according to previous articles Yang Yilin would turned 15 this month. But, according to the China sports committee Yang Yilin is turning 16 this month. That would actually qualify her for the competition since she would have to turn 16 this year to be eligible. But, the fact that NBC has her listed as 15 is still humerous considering this growing controversy.