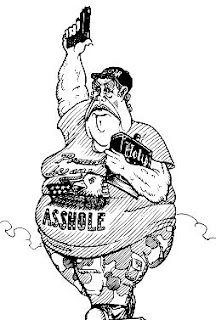 (Pain Comics)
An outraged and bitter Tampa Bay man clinging to his gun and religion went on a shooting rampage last night at his trailer park after the Michelle Obama speech.
TampaBay.com reported:

The man stood outside his RV, yelling and shooting a gun into the air. When Pasco sheriff’s deputies confronted him, he ran inside and wouldn’t come out.

That started a six-hour standoff late Monday night between the man, whose name was not released, and authorities, Sheriff’s Office spokesman Kevin Doll said.

Finally, about 5 a.m., he exited his RV and was taken into custody. The cause of his displeasure, according to Doll, was Michelle Obama’s speech last night at the Democratic National Convention.