The two leaders discussed the improved security situation in Iraq. 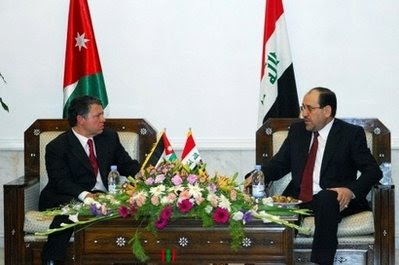 King Abdullah II of Jordan (left) talks with Iraqi Prime Minister Nuri al-Maliki in Baghdad. King Abdullah II was in Baghdad on the first visit to Iraq by an Arab head of state since the 2003 invasion. (AFP/HO)

King Abdullah of Jordan became the first Arab leader to visit Baghdad since the fall of the Saddam Hussein regime in 2003.
The BBC reported:

King Abdullah of Jordan has become the first Arab head of state to visit Iraq since the US-led invasion to overthrow Saddam Hussein in 2003.

A statement by the Iraqi government said he had held talks with Prime Minister Nouri Maliki in Baghdad.

“They discussed the progress made in Iraq, and especially the great success achieved by the government of Iraq in the security file,” it said.

Nancy Pelosi and Harry Reid were not available for comment.

Related… Christopher Hitchens had more on the good and concealed news coming from Iraq:

“Mission accomplished.” …Iraq no longer plays deceptive games with weapons of mass destruction or plays host to international terrorist groups. It is no longer subject to sanctions that punish its people and enrich its rulers. Its religious and ethnic minorities—together a majority—are no longer treated like disposable trash. Its most bitter internal argument is about the timing of the next provincial and national elections. Surely it is those who opposed every step of this emancipation, rather than those who advocated it, who should be asked to explain and justify themselves.

UPDATE: King Abdullah called on Arab governments to “extend their hand to Iraq” because a strong Iraq “is a source of strength for the Arab nation” during his visit The New York Sun.