“I mean, you got the first mainstream African American who is articulate and bright and clean and a nice-looking guy.”

So much for “hope and change”…
Barack Obama picked long-winded Senator Joe Biden from Delaware for his running mate it was announced this morning. 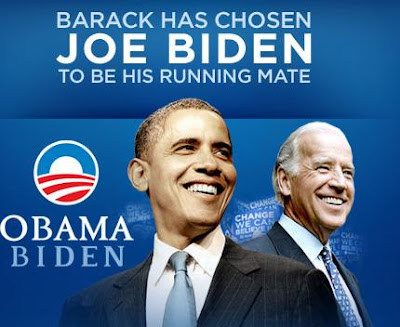 He is asking for donations on his website.
The AP says the “newly minted ticket” will perform today in Springfield, Illinois the hometown of Republican Abe Lincoln:

Obama announced the pick on his Web site with a photo of the two men and an appeal for donations. A text message went out shortly afterward that said, “Barack has chosen Senator Joe Biden to be our VP nominee.”

Biden, 65, has twice sought the White House, and is a Catholic with blue-collar roots, a generally liberal voting record and a reputation as a long-winded orator.

Across more than 30 years in the Senate, he has served at various times not only as chairman of the Foreign Relations Committee but also as head of the Judiciary Committee, with its jurisdiction over anti-crime legislation, Supreme Court nominees and Constitutional issues.

In selecting Biden, Obama passed over several other potential running mates, none more prominent than former first lady Hillary Rodham Clinton, his tenacious rival in dozens of primaries and caucuses.

Obama’s campaign arranged a debut for the newly minted ticket on Saturday outside the Old State Capitol in Springfield, Ill.

Biden is a known plagiarizer. He also was a staunch supporter of the Iraq War and created a stir when he pushed to divide the democracy of Iraq into three ethnic groups.

And just think… It wasn’t that long ago that Joe Biden suggested to John Kerry that he pick John McCain as VP.