President Saakashvili of Georgia runs for cover during a visit to Gori with EU envoys when his security forces raised the alarm:
(53 seconds)

TigerHawk wonders where the true antiwar protesters are hiding are during this Russian siege on Georgia.

Meanwhile… Pravda announced that Russia had defeated US, not the Georgian army in South Ossetia.

Georgia is transferring “all its troops” from South Ossetia towards Tbilisi amid fighting in the city of Gori, about 35 miles to the south-east of the capital –Telegraph. 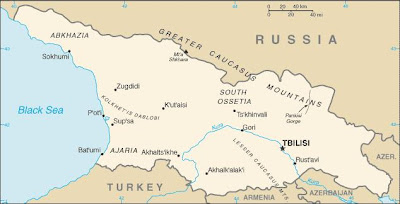 (UT)
Powerline has a detailed map from Stratfor that shows the Russians are attacking Georgia bases well outside of South Ossetia.

UPDATE: The Ministry of Foreign Affairs of Georgia Blog is posting updates on the situation.