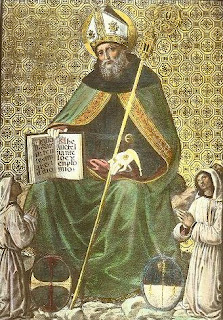 Speaker Pelosi was on Meet the Press this past weekend defending her vicious record on abortion.

REP. PELOSI: I would say that as an ardent, practicing Catholic, this is an issue that I have studied for a long time. And what I know is, over the centuries, the doctors of the church have not been able to make that definition. And Senator–St. Augustine said at three months. We don’t know. The point is, is that it shouldn’t have an impact on the woman’s right to choose.

Of course, this is not true.
St. Augustine (354-430) condemned abortion because it breaks the connection between sex and procreation… In a disciplinary sense, the general agreement at this time was that abortion was a sin requiring penance if it was intended to conceal fornication and adultery.
But, the truth doesn’t matter to Speaker Pelosi.
…Just like voting to approve the gruesome partial birth abortion procedure does not matter to this Catholic in name only.

The Anchoress is all over Pelosi’s inconvenient truths:

If Pelosi wants to quote Augustine’s saying “three months,” as somehow authoritative – even if the church does not – how does she reconcile that with her abortion voting record, which upholds later term abortions, partial birth abortions, embryonic experimentation, etc, etc. She says “I personally think the answer is 16 weeks,”, but that’s just an opinion, like anyone else’s opinion, even mine – and if she believes the answer is 16 weeks, how can she possible vote in favor of, say, partial birth abortion?

Ace and American Papist have more on Pelosi’s efforts to confuse.

Catholic Republican Representatives wrote Pelosi a letter today attacking her for mangling Catholic doctrine. They are asking her “to correct the public record and affirm the Church’s actual and historical teaching that defends the sanctity of human life.”

It’s bad enough that the Speaker is rated 0% by the National Right to Life Association for her perfect record of supporting any and all types of abortions.
It’s another thing entierly that she lies about the church’s view on abortion.