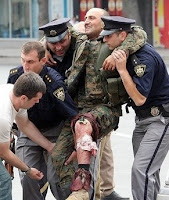 Georgian policemen evacuate a Georgian soldier, wounded in battle with South Ossetian separatists, in the town of Gori on August 8, 2008. The US presidency on Friday called on “all sides” in the conflict in Georgia’s breakaway region of South Ossetia to resolve the crisis peacefully. (AFP/Vano Shlamov)

Russia sent 150 tanks to South Ossetia today after fighting broke out between Georgia and fighters in the breakaway province.
FOX News reported:

Parts of Russia’s 58th Army — including 150 tanks and armored vehicles — reportedly were moving Friday on the capital of South Ossetia after Georgian troops entered the city in an attempt to crush separatist forces seeking to control the breakaway province.

Kakha Lamaia, a member of Georgia’s National Security Council, told Reuters the two countries are “very close” to war, if not already at war.

“If it’s not war, then we are very close to it,” Lamaia said. “The Russians have invaded Georgia and we are under attack.”

President Bush and Russian Prime Minister Vladimir Putin reportedly were discussing the Georgia crisis after attending the opening of the Beijing Olympic games. 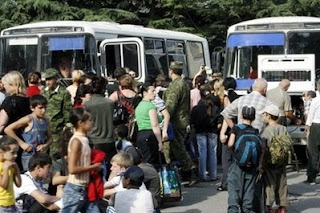 Refugees from a maverick Georgian region of South Ossettia leave its capital Tskhinvali for Russia. The United States on Monday called for an end to violence in Georgia’s breakaway region of South Ossetia, which in the past week has seen the deadliest clashes in the province in years. (AFP/Kazbek Bassayev)

Pro-Western Georgia is appealing to the US for assistance.