Chi-com gymnast wins medal after falling on her a$$ in the final. 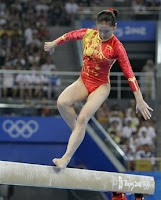 China’s gymnast Cheng Fei wobbles on the balance beam during the Olympics gymnastics competition in Beijing. On Sunday Cheng Fei fell on her a$$ but was awarded a medal by the judges anyway. (AP Photo/Amy Sancetta)

The People’s Daily was very proud of the young Chi-com gymnast even though she fell down on her vault:

Chinese veteran Cheng Fei remained a heroine in the eyes of spectators and her contenders on Sunday, although she failed to realize China’s long-held dream to claim Olympic titles in women’s vault and floor exercises.

As three-time world vault champion, Cheng led the field with a pair of extremely difficult vaults, with one named after her…

Loaded with the hope to make history, Cheng tumbled in her second jump in vault before home fans.

But, it was enough for the young gymnast to win a medal and knock American Alicia Sacramone into 4th place.

Coach Bela Karolyi was outraged with the corruption of the judges on the vault. He was just as outraged when China used underage pixies to compete in the team competition.

Michelle Malkin has more Chi-com Olympic moments of the day.