After lying about it for months–
That he was having an affair with staffer Rielle Hunter:
(Notice Carl Cameron roll his eyes– Priceless!)

John Edwards’s was romping around in the hay while his wife Elizabeth has been battling breast cancer. Edwards insists that he had the affair while her disease was in remission although the news of the affair news broke in October 2007 and his wife’s cancer was announced in March 2007.
Tom Maguire says, “Get Rielle!”

John Edwards repeatedly lied during his Presidential campaign about an extramarital affair with a novice filmmaker, the former Senator admitted to ABC News today.

In an interview for broadcast tonight on Nightline, Edwards told ABC News correspondent Bob Woodruff he did have an affair with 44-year old Rielle Hunter, but said that he did not love her.

Edwards also denied he was the father of Hunter’s baby girl, Frances Quinn, although the one-time Democratic Presidential candidate said he has not taken a paternity test.

Glenn Reynolds has a cheater’s roundup.
Mickey Kaus has analysis. 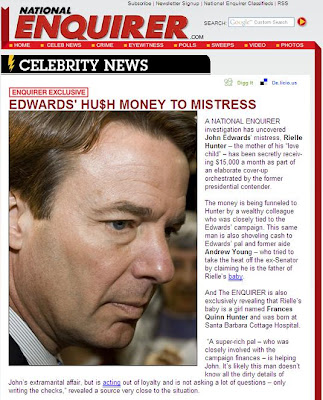 The National Enquirer has been reporting on the story of Father of the Year award winner John Edwards and his mistress, Rielle Hunter, for months.
Frances Quinn Hunter was born on Feb. 27 to Rielle Hunter.

Doug Ross has more on the hush money angle to the story.

NBC has the Edwards-Hunter timeline.

UPDATE: The Anchoress has more on the stumble.

UPDATE 2: Poor Elizabeth Edwards wrote a diary at The Daily Kos tonight on the scandal.