Democratic Vice Presidential Candidate Joe Biden’s lobbyist son and brother are accused of defrauding a former business partner and an investor of millions of dollars. 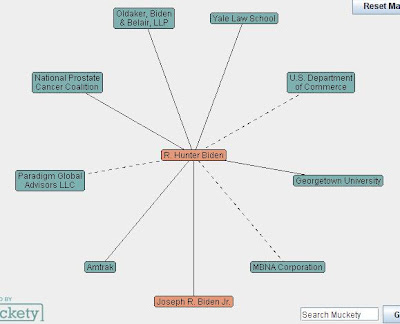 R. Hunter Biden is one of Senator Joe Biden’s (D-DE) three children. He was a founding partner of Oldaker, Biden & Belair, a D.C. lawyer-lobbyist shop, served as a Senior Vice President at a major financial services firm and most recently was a Presidential appointee at the U.S. Department of Commerce, where he served as the Executive Director for e-Commerce Policy Coordination under Transportation Secretary” Norman Y. Mineta during the Clinton administration… In 2003, he got a $100,000 annual retainer from MBNA to advise the company on ‘the Internet and privacy law. MBNA is Senator Biden’s biggest contributor. (Muckety)

A son and a brother of Sen. Joseph R. Biden Jr. (D-Del.) are accused in two lawsuits of defrauding a former business partner and an investor of millions of dollars in a hedge fund deal that went sour, court records show.

The Democratic vice presidential candidate’s son Hunter, 38, and brother James, 59, assert instead that their former partner defrauded them by misrepresenting his experience in the hedge fund industry and recommending that they hire a lawyer with felony convictions.

The legal actions have been playing out in New York State Supreme Court since 2007, and they focus on Hunter and James Biden’s involvement in Paradigm Companies LLC, a hedge fund group. Hunter Biden, a Washington lobbyist, briefly served as president of the firm.

A lawsuit filed by their former partner Anthony Lotito Jr. asserts in court papers that the deal was crafted to get Hunter Biden out of lobbying because his father was concerned about the impact it would have on his bid for the White House. Biden was running for the Democratic nomination at the time the suit was filed.

The suit against Hunter Biden was previously reported in January 2007.

Joe Biden does not talk much about his son’s lobbyist background. Hunter Biden lobbied for clients that paid his firm at least $380,000 in the first six months of this year, federal records show.

Dan Riehl has more on the Biden Amtrak connections.