Georgian television reporter Tamara Urushadze was shot in the arm today while reporting on live television. Unbelievably she tries to continue her report as colleagues bandage her up. In the dramatic footage she says that her arm had been grazed by a sniper bullet.
AMAZING VIDEO!!!

A heroic female Georgian reporter was shot by a Russian sniper during a live TV broadcast today – but managed to continue giving her report while clutching her bleeding arm.

Tamara Urushadze suddenly disappeared from view in a commotion while giving her report in Gori today.

On Tuesday, Stan Storimans, a cameraman with Netherlands-based television channel RTL Nieuws, was killed during a bombing in Gori. 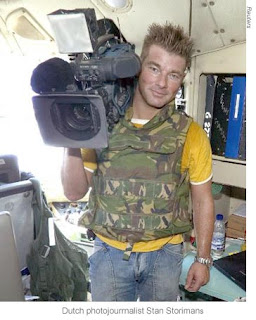 At least, three journalists have been killed and nine wounded since fighting erupted Thursday between Russian, Georgian, and local forces in the disputed region of South Ossetia –CPJ.org.