After the arrest yesterday of 3 radical Islamists who were plotting the assassination of Danish cartoonist Kurt Westergaard newspapers across Europe reprinted the dreaded cartoons of Mohammad that started the rioting back in 2006.
Here’s the Westergaard creation that is driving Islamists to kill: Actually, it was not the original 12 cartoons posted in Jyllands-Posten that made the Islamists go wild. It was the three added bogus cartoons that were thrown in the package that drove the Islamists to kill. 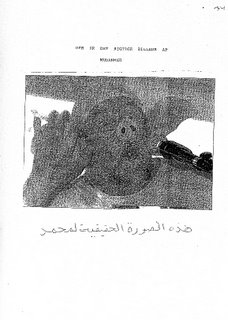 Blogger Dennis Nixon later identified one of the “cartoons”.
This was NOT a picture of Muhammad!

This is Jacques Barrot, a pig squealing contestant at the French Pig-Squealing Championships in Trie-sur-Baise’s annual festival.
This was proof that the Danish Imams were spreading lies.
The mainstream media still omits this fact when reporting on the cartoon controversy.

This video on the cartoon jihad “Taqiyya!” by Bryan Preston at HotAir was (and still is) an exceptional display of the insanity of the cartoon riots:

At least 139 people, mostly Muslims, died in the cartoon rioting.
Another 823 were injured in the Mohammad cartoon riots.

UPDATE: Judith Apter Klinghoffer at the History News Network has more on the Danes.