And… I’m sure there’s a fine Study Group or a former president out there somewhere who would agree with him!!

Zawahiri also says that only jihad will liberate Palestine… not democratic elections.
Wizbang notes that jihad hasn’t worked out that well for them, so far.

Especially when they ‘jihad’ against each other! 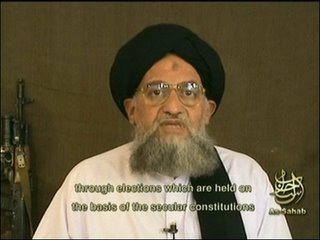 Zawahiri has vowed in a videotape that the terror group will not stop attacks on US soil as long as the United States strikes Muslims on their land.(AFP/Al-Jazeera)

Al Qaida #2 al-Zawahiri says that US should negotiate with the holy warriors of Al Qaeda in Iraq!
The AP reports:

CAIRO, Egypt – The deputy leader of al-Qaida, Ayman al-Zawahri, told the United States on Wednesday that it was negotiating with the wrong people in Iraq, strongly implying in a video broadcast on Al-Jazeera that Washington should be talking to his terror group.

“I want to tell the Republicans and the Democrats together… you are trying to negotiate with some parties to secure your withdrawal, but these parities won’t find you an exit (from Iraq) and your attempts will yield nothing but failure,” al-Zawahri said on the tape, sections of which were aired in successive news bulletins.

“It seems that you will go through a painful journey of failed negotiations until you will be forced to return to negotiate with the real powers,” he said, without identifying these powers.

The video — which bore the logo of al-Qaida’s media production house, al-Sahab — was the 15th time this year that al-Zawahri has sent out a statement. In Wednesday’s tape, he appeared exactly as in previous videos that have been authenticated by CIA analysts. He wore a black turban and white robe and pointed his finger at the camera for emphasis. As usual, he had a rifle behind his right shoulder that was leaning against a plain brown backdrop.

Al-Zawahri attacked the proposal of Palestinian President Mahmoud Abbas to hold early elections to resolve the contest between the Fatah and Hamas parties, which has degenerated to daily gunbattles in the streets of Gaza.

In the clips broadcast by Al-Jazeera, al-Zawahri did not say how the two parties should settle their dispute, but he scoffed at elections, saying: “Any way other than holy war, will lead us only to loss and defeat.”

I’m placing bets on which democrat will be the first to agree with him!…
Any takers?

It is interesting that even Zawahiri believes that negotiating with Syria and Iran is a mistake!