Here are a couple of completely outrageous liberal articles from the AP today:

The AP reports this morning that…
Bush is “ignoring” the Iraq Study Group’s criticisms of Iraq war handling.
(Not that it would be an altogether bad thing.) 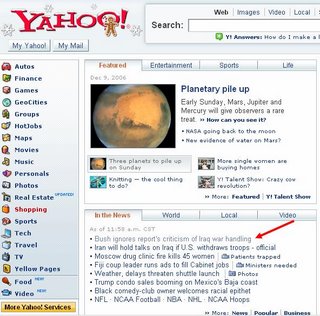 Click to Enlarge
Later the AP changed the headline to “Bush Pans Criticism Of Iraq War Handling” since, of course, he did not “ignore” the report or the criticisms from the report.

I will tell you one thing for sure, though… The Kurds hate it!

But, a new day is coming round the bend. Halleluiah! 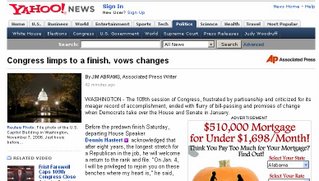 Click to Enlarge
And, get this first paragraph from AP writer Jim Abrams:

WASHINGTON – The 109th session of Congress, frustrated by partisanship and criticized for its meager record of accomplishment, ended with flurry of bill-passing and promises of change when Democrats take over the House and Senate in January.

Now, did that come straight from the democratic party’s website?

Does Abrams moonlight as a speech writer for the democrats?
I wonder how not seating Republican Congressman Vern Buchanan fits in with easing partisanship?

I’ll say it again. Republicams better get creative because they will never get their message out in this age of biased news reporting.
Let’s face it.