Student Ahmad Batebi is being detained in the most unspeakable conditions. 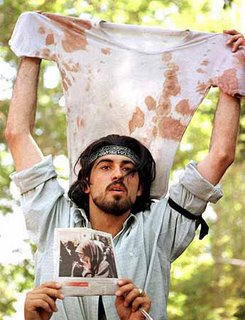 His family, after visiting him in prison, describe the status of his health as extremely worrisome.

Please remember those students who are being persecuted in Iran today…
Iran Press News reports on this year’s “Student’s Day” protests in Iran:

This year on the anniversary of “students’ day” many students still remain in prison run by agents of the ministry of intelligence and security and others are on the verge of imprisonment.

Ahmad Batebi, imprisoned student leader is in the infamous Ward 209 of Evin Prison and is being detained in the most unspeakable condition; his family, after visiting him in prison, described the status of his health to be extremely worrisome.

Like Batebi, Kianoosh Sanjari is also being detained in the very same ward 209, in solitary confinement and under severe torture and a number of student activists like Kheirollah Derakhshandi, Abolfazl Jahandar, Keyvan Ansari are also enduring similar conditions in prison.

During the violent clashes in October between supporters of the senior Shi’ite Muslim cleric who has challenged Iran’s system of clerical rule and the regime, student activist Kianoosh Sanjari went missing.

On the other hand a large number of students have been sentenced to outrageous prison terms and are being deprived of further education and this trend of summoning students and pressuring them seems to have no end.

The student committee for the defense of political prisoners calls on all our compatriots to participate in a protest against the continued imprisonment of students and other issues, on Wednesday December 6th at 12 noon in front of the Tehran university college of technical studies. 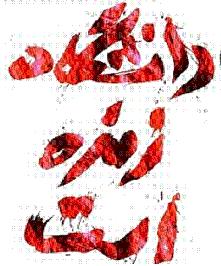 The young bloggers have also published a bulletin to announce the occasion of this anniversary.

The despotic rulers, in their final stages of existence are faced with everyone’s contempt; on the one had they are under pressure by the international community for their severe human rights violations, their attempts at making nuclear weapons as well as the increasing oppression of women and youth of our country, just to name a few of their offenses.