This could be it!… This could be the start of a New War!
Hezbollah is infiltrating rival neighborhoods and starting clashes!

Shia and Sunni Muslims clashed in a Beirut neighborhood earlier today and one Shia Muslim was killed in gunfire! 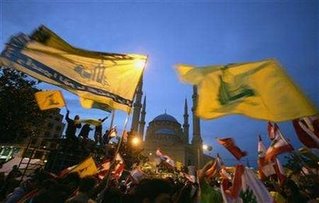 Hezbollah supporters wave their flags in front of Al Amin mosque in Beirut December 3,2006. A Shi’ite Muslim Lebanese man was shot dead in a Sunni neighborhood on Sunday as he returned from a third day of protests against the Western-backed government. (REUTERS/Eric Gaillard)

Rick Moran has more on the confrontation and offers his take on the situation.
The AP reports:

Violent clashes broke out Sunday between Shiite and Sunni Muslims in the capital, leaving one man dead from gunshot wounds at a time when tensions throughout Lebanon threaten the country’s fragile sectarian and political balance.

Tension has been running high in Lebanon, particularly since Friday when Hezbollah supporters began an open-ended sit-in in Beirut in an effort to bring down the U.S.-backed government of Prime Minister Fuad Saniora.

Saniora, emboldened by Arab and international support for his U.S.-backed government, vowed on Sunday to stay in office despite the ongoing protests.

Amid the sound of revolutionary and nationalist songs blaring from protesters’ tents set up in the heart of Beirut, Lebanon’s capital, a Mass was held at Saniora’s office in memory of Industry Minister Pierre Gemayel who was assassinated by gunmen in a Beirut suburb last month.

The clash in Tarik Jdideh occurred as a group of Hezbollah supporters were returning from Beirut’s downtown and passed through the Sunni neighborhood.

Police officials said the two sides threw stones at each other, then shots were fired, killing Ahmed Ali Mahmoud, a 20-year-old Shiite. The officials spoke on condition of anonymity because they were not allowed to speak to the press.

At least 10 other people were slightly injured elsewhere in West Beirut in similar clashes.

Hezbollah, an ally of Syria that is backed by many Shiite Muslims and some Christians, contends the fight is against American — not Syrian — influence, saying the United States now dominates Lebanon in the interests of Israel.

Hezbollah with Syria are provoking a civil war!
Abu Kais at Michael J. Totten reports this:

Yesterday, around 300 Hizbullah members reportedly chased a man who hurled insults at Hassan Nasrallah and then fled towards nearby Ashrafieh. The Lebanese army stopped the advance of the militia on the Christian neighborhood and arrested the individual, who turned out to be a Syrian citizen by the name of Hamzah Mohamad Sadeq Ismail. Al-Mustaqbal described this as a Syrian intelligence attempt to create clashes, although one wonders what Hizbullah was thinking by sending 300 members to a Christian neighborhood boiling with rage. 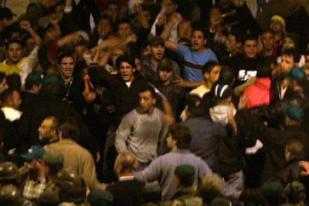 Aljazeera Photo
The Daily Star has this on more clashes today:

In other clashes Sunday night, one person was shot and a few injured in the Bourj Abi Haidar area. A few streets away, in Barbour, another person was arrested in a shooting incident.

Al Jazeera says that several other skirmishes broke out in the capital:

Al Jazeera’s Hashem Ahelbarra reported that the several other skirmishes between rival protesters were quickly put down by security forces.

Naharnet says that there were two seperate streeet fights:

A young man was killed and three other people were wounded Sunday in two separate street fights in Beirut between opposition and government supporters, as army troops and security forces were swiftly beefed up to prevent further escalation.

Security sources identified the killed man as Ali Ahmed Mahmoud, a 20-year-old Shiite, who died of his wounds.

They said four other people were wounded in the clashes which took place in the densely-populated Tarik Jedideh neighborhood and on the Badaro-Qasqas highway.

They said sporadic bursts of automatic gunfire could be heard in the confrontation which lasted about 45 minutes before army troops and police patrols stepped in to disengage the opponents.

From Beirut to the Beltway has more.
The Beirut Spring reports that over 10,000 demonstrators in Tripoli, which is predominantly Sunni, gathered to protest in support of the government today.
Lebanese Bloggers– “Either Hezbollah goes, or Lebanon goes.”