The rally was peaceful until the protesters drew their weapons and shot up the legislative council building. 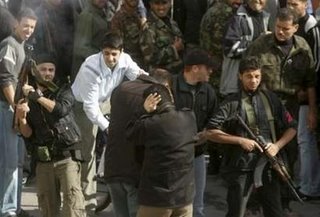 Palestinian security personnel fire into the air, during a rally by uniformed police and other security officers demonstrating over the non-payment of their salaries. (Reuters)

Two people were wounded when shots were fired back from the council building:

At least two guards were wounded as security forces protecting the parliament exchanged fire with the demonstrators. 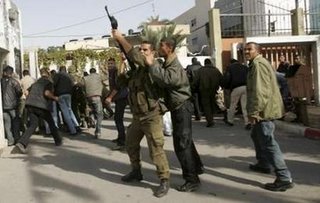 In other developments, Israel is so far blocking the trip to Gaza by Desmond Tutu to investigate the deaths off 19 civilians in Gaza last month.

Palestinian Authority president, Mahmoud Abbas, said today he may call for early elections… That went over like a lead baloon. Hamas called it an attempted coup!